This was last month, but still memorable as tomorrow is the day of THE VOTE.  We shall see.  But this was my first ever political rally.  And it was with a man who may make history tomorrow.  Beto O’Rourke – the Democrat Congressman/common man/listener/and the most traveled man in Texas, was giving a fundraiser/politically rally for his run for Senate in Texas.   This was in DC, when he was back for the sessions in the House.

I had already been a fan since his live stream of when, during an intense snowstorm with flights canceled, he rented a car with a Republican Texas colleague, and drove cross-country to DC to get back in time for a vote.  Just the bi-partisan nature of it was fantastic in a period of intense partisan bickering.  https://www.elpasotimes.com/story/news/politics/blogs/tx-capital-report/2017/03/16/20-best-moments-orourke-hurds-road-trip/99223134/.

And then I was completely won over by his speech regarding the rights of NFL players to kneel before the flag to try to draw attention to violence against minorities.  It was amazing.  https://www.youtube.com/watch?v=lAw9eXXVwfM.

So even before my parents in Texas had heard of him, I went to a well-hipster-attended rally in DC.  Whohoo! 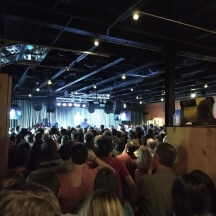 But best yet, he insisted on making himself available for hugs and photos with over the 1000 people who attended.  I wound up in a slow line, so he was sopping wet with sweat by the time I got there, but you couldn’t tell from the photo, luckily.  Introducing myself as the vegetarian daughter of a Texas cattle-rancher, I generated big smiles from him – and he does have a big smile.  He’s like a cross between Jimmy Stewart and JFK.

Anyway, he’s a good guy, and intends to be a Statesman, not a politician.  His views are progressive, but then so am I, yet he also intends to listen and build bridges.  FYI, he has accepted no money from PACs.  And yes, he has done a couple 4 Pinocchios (Google it.), but he tries hard actually to tell the truth, and does much, much better than Ted Cruz (who I despise as an obstructionist, and misogynist, and…, I could go on).

So I promptly told my parents to watch for him on TV and Mom has at least, and was impressed.  Fingers crossed for tomorrow.  But if not the Senate this year, then in the future, .   And maybe, he can help heal this country if given the chance.

Okay – that’s my political post for the year.  Cheers, all – and vote!

Recent Posts: Adventures Across the Years

Adventures in 2019 – Catching Up: Bahrain

Pearl Fryer’s Topiary Garden and other random art in or near Columbia, S. Carolina.

My Solar Panel Installation — on Earth Day, No Less

Sleeper Car on the Train

An Impulse to Get Inked

Samples from the previous blog:: AdventuresAcross2015

Volunteer to save lives from HIV

Face-painting kids on Halloween is a Treat

Even More Past Adventures: adventuresacross2014

Adventures Across 2015 have started — in a Sensory Deprivation Tank!

The Year 2014 in Adventures

Candlemaking with my Dad

Simply through a Lens

The Paris Agreement, the USA, and You

It is during such times that we realize the power individuals hold towards determining the future of the world.

A Tool Library Is a Seed

or How Collaborative Communities Can Reduce Global Warming….

According to the United Nations, the climate crisis has become the defining issue of our generation. With the legislative and executive branches of states around the world failing to act, however, the judicial branch often remains the last resort to address the growing human rights and environmental crises. Learn more on how you can take … END_OF_DOCUMENT_TOKEN_TO_BE_REPLACED

“….this past winter the ground never froze, so we have a banner year for destructive insects…”

Wind up Plastic-Free July by spending some time with us learning what is plastic, its impacts – good and bad – including on climate change, and how to fight plastic pollution throughout the year. Dr. Annette Olson, Founder of Climate Steps and the Lead for Green Neighbors DC, and guest Den Fusso, plastic activist, will … END_OF_DOCUMENT_TOKEN_TO_BE_REPLACED

Announcing a new resource page for Climate Steps – Podcasts, which has reviews of 13 informative podcasts in the areas of climate science, how climate change affects us, the all important climate solutions, and then the environment in general. Three of my favorites are: The Mint Climate Change Tracker, which provides an overview of climate … END_OF_DOCUMENT_TOKEN_TO_BE_REPLACED

Hey again. There’s a campaign that’s been growing yearly, which started in Australia, to make July Plastic-Free. https://www.plasticfreejuly.org. If you are wondering about how plastic relates to climate change, it significantly causes it: Plastic comes from natural gas and oil – methane is released during drilling; CO2 is released during manufacturing; There’s transportation to a … END_OF_DOCUMENT_TOKEN_TO_BE_REPLACED

What is a Climate Step?

….it is one way we show our respect for the sufferings of others…

Why We Must Stop Asking for New Roads

….people don’t behave like water molecules. Whenever a new road is opened, we change our behavior.

Stuck at Home, yet Saving the Climate….

Need a list of things you can do to save the planet while stuck at home or in the yard, self-isolating? Well, there’s no need to binge-watch shows you aren’t interested in. Instead …