Catching up on another adventure – really two at once, but here I am months behind getting this up.  Let’s start with the first thing I had never done before – the more touristy one – Amsterdam.  I had the chance to go in late May due to a conference.  A little past tulip time, but it was still quite beautiful.

By the way, what a time to find out your little auto camera with the great lens no longer focuses.  I had to resort to my cell phone camera at times.  Not the best, but decent.

The gorgeous canals and architecture…

The flower market. Nurseries (and tourist shops) floating on barges in Amsterdam. 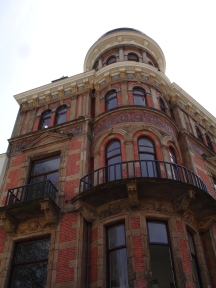 A house well known for its indoor courtyard.

Amsterdam was made especially fantastic by my friends Beth and Root, who had been living there a year.  Beth helped me plan every spare second I had around the conference, and with biking, museums, cafes, shopping, and great dinners, we all had a blast.

The conference was in a modern part of town, which was cool, because this way I got to see a massive – and orange – basketball court on top of a building.

View from Beth and Root’s place.

A somewhat different view from Beth and Root’s place.

The Roof fronts, with pulleys to lift furniture upstairs. As a result, these old houses all lean out a little bit at the top. 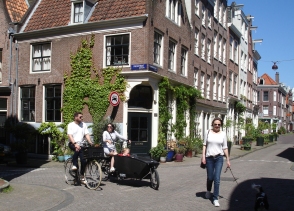 In its various forms.

And yet bike-stealing and throwing them into the canal also is rampant here. A barge after a day of fishing. 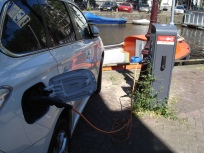 I should have pulled up the weed, because I really want to promote electric cars, and it would have made this photo even more palatable. 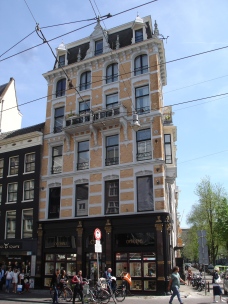 Another view from B&R’ts. Look closely in the shadow, for the sign to the Marijuana Museum.

They are on the border of the red light district. And no, I didn’t take photos. It really wasn’t a pleasant site to me – the women looked miserable for the most part (not all.)

Life in Amsterdam involved a lot of play outdoors during this gorgeous weather.

Getting off the bike ferry.

View from my hotel breakfast area.

Beth and I started at the Heineken Brewery, which was interesting, but I’ll only put in a couple photos from that.  Otherwise Beth, Root, and I biked everywhere, museum-ed (Van Gogh!!!), and ate at vegetarian/vegan places (which are harder to find than you think – but Beth had it all scoped out.) 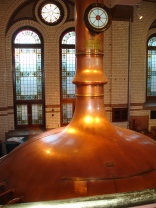 At the conference actually. Entertainment was provided.

The royal barge at the Maritime Museum.

I did not get to see the Anne Frank house and museum.  Beth had warned me that I needed to get tickets four months in advance.  I checked at five months, tickets were open.  I checked at exactly three and three-quarters of a month, and they were gone.  I don’t think my heart could have handled seeing the actual house – the book alone devastated me.

Signs (at the Amsterdam museum) from when many folks could not read, and other art.  I noted several of these signs throughout the city (though usually smaller).

White asparagus, which was in season, pasta. ugh. A restaurant trying too hard.

The blue painted pottery of Holland, with a new twist. I wanted so much for this store to be open, as I wanted to buy these!

The Op Solder’s Home is the oldest museum in Amsterdam, based around house from the 1600s that has a special place in Amsterdam history.  It holds an example of how official religions were set by the government, while others were less accepted/prohibited.  In Amsterdam, the Catholic and Protestant churches kept switching as the official religion.  When that happened, the unofficial religions could not meet publicly, but authorities would not usually persecute private worship.  So church services were held in homes.  In this case (and several others in the city), a family created a Catholic church in its attic in 1663.  The home itself was already fascinating (see the kitchen and stairs, and then I don’t have pictures of the family ‘receiving hall”),  but to have a full three-story church in your attic, which is already above two-three floors – pretty amazing.

A living room, which changes at night to e a bedroom.

One of two kitchens in the house

Love it, whatever it is. 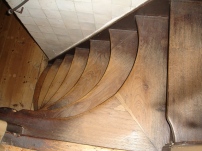 Original stairway in the house to the main bedroom.

The church in the “attic” is 3 stories

The final attic at the top, where the ropes are for hauling goods outside up to the higher levels.

The dancing houses of Amsterdam…

Zoom in – this is the best part!  These houses have shifted over the centuries due to the posts that were sunk into the ground sinking a bit more over time, occasionally rotting, etc…  More information is found here: https://whatsupwithamsterdam.com/amsterdam-houses-crooked/.  I love them, but no way could I sleep in one.  I live in a 100-year old house right now, that has settled some over time forming some cracks (now fixed) and have had crazy nightmares in the past about it sinking.  But here in Amsterdam, the floors are rarely ever level.

So now, the next adventure.  My first marijuana.  I have never had a joint.  Really.  Yes, really.

Obviously, some background is needed.  Once upon a time, I used to be a goody-two-shoes from Texas (do not look up the term in the Urban Dictionary version – I was never that bad – ha, not a pest anyway), but I gave that up a bit when I moved to Miami.  Still, the concept of drugs to me was bizarre – I was already having a blast in Miami, and I didn’t need drugs to have more.  I also have been very aware that I have a hard time breaking bad habits.  Combine that with the fact I thought smoking was (is) truly disgusting, and the result:  I never tried marijuana.  Man, do people even know how much the bad stuff smells like skunk?   But my interest peaked when (1) I was diagnosed with rheumatoid arthritis, and (2) I started my 2014 and 2015 adventures.  It was on my bucket list.  With it becoming legal everywhere, and the potential for marijuana to alleviate the pain, really, how could it not be?

But wait, you say, you live in DC – where marijuana is now legal!  Aha, but buying it is not, just the possession and smoking of it in private.  I could get it if needed easily for medical reasons; still, how cool would it be to have your first smoke in a coffeehouse in Amsterdam?  Oh – did I mention the irony of the conference I attended being on integrity and ethics? 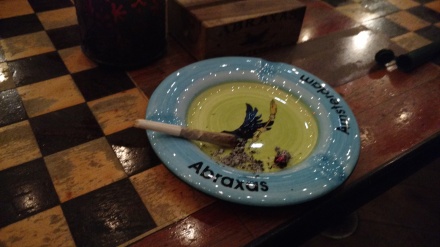 My friends and my smoke. 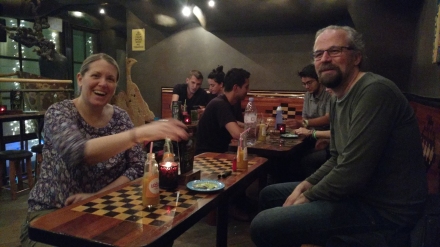 Nice.  That’s it.  I didn’t choke, cough – or otherwise react at all.  No mellowness, no extra cool vibes, no moodiness, sleepiness, or other -esses.  Kindof disappointing.  I was glad I could smoke it quite easily – it was nice to smoke actually.  Darn – that could be a problem.   But damn, no pain relief either.  And by the end of several days of walking and biking everywhere in Amsterdam – I hurt!  I understand that many people don’t really react the first time – maybe another time would work, but I am really not going out of my way to try again, unless my dcotor says so.

So there are those adventures.  Beth made a great comment – Amsterdam is my type of town.  The markets, restaurants we ate at, architecture, museums, stores, and parks we visited.  A fantastic atmosphere (and the city does not smell like skunk.)   So much good fun had. And thanks, Beth and Root, for making me feel at home.  Amsterdam fits you well – and me too.

Recent Posts: Adventures Across the Years

Adventures in 2019 – Catching Up: Bahrain

Pearl Fryer’s Topiary Garden and other random art in or near Columbia, S. Carolina.

My Solar Panel Installation — on Earth Day, No Less

Sleeper Car on the Train

An Impulse to Get Inked

Samples from the previous blog:: AdventuresAcross2015

Volunteer to save lives from HIV

Face-painting kids on Halloween is a Treat

Even More Past Adventures: adventuresacross2014

Adventures Across 2015 have started — in a Sensory Deprivation Tank!

The Year 2014 in Adventures

Candlemaking with my Dad

Simply through a Lens

Announcing a new resource page for Climate Steps – Podcasts, which has reviews of 13 informative podcasts in the areas of climate science, how climate change affects us, the all important climate solutions, and then the environment in general. Three of my favorites are: The Mint Climate Change Tracker, which provides an overview of climate […]

Hey again. There’s a campaign that’s been growing yearly, which started in Australia, to make July Plastic-Free. https://www.plasticfreejuly.org. If you are wondering about how plastic relates to climate change, it significantly causes it: Plastic comes from natural gas and oil – methane is released during drilling; CO2 is released during manufacturing; There’s transportation to a […]

What is a Climate Step?

….it is one way we show our respect for the sufferings of others…

Why We Must Stop Asking for New Roads

….people don’t behave like water molecules. Whenever a new road is opened, we change our behavior.

Stuck at Home, yet Saving the Climate….

Need a list of things you can do to save the planet while stuck at home or in the yard, self-isolating? Well, there’s no need to binge-watch shows you aren’t interested in. Instead …

….cover the one-species grass lawn of death with cardboard, loads of compost, and then mulch. Then plant new native plants in….

And then this song came along. One of the best Climate Songs ever. Adorable Irish children rapping about the climate.

WE have the Power Now

It’s a new year, 2020, and it’s a time to understand that we, the public, are now more empowered than ever before in this climate emergency, despite how incredibly impotent we feel with the horrible devastation in Australia, which is experiencing catastrophic bushfires, extreme heat, and incredible wildlife mortality. With the loss of 30% of […]

Article by Annette Olson and Carrie McLaughlin, 2018. Wow.  Christmas 2016 was when I (Annette) wrote my second Climate Steps blog ever – Christmas Climate Steps, and it’s now SO LONG AGO.  It’s been a weird two years, definitely.  And during this time, many of us have been motivated to build the Climate Steps movement […]

Trees. Gorgeous and calming, providing homes for birds and other life, they also help clean the air of carbon dioxide and produce oxygen. And, if planted in a city or in your backyard, will cool during the summer and warm in the winter. So here’s a brief list of tips to consider about helping save […]